The September autotest was held near Calthwaite, with the new venue, thanks to Colin, Patricia & Sam Trotter. We had an entry of 18 crews, with 10 newcomers, 4 juniors and 4 ladies on the list.

Fastest on the first test were Barry Lindsay & Colin Trotter on 59 seconds. Followed behind by on 1m 1second; Jon Ross, Jon Stynes, newcomer Carl Barnett. The first person of the day to “kiss a cone” was newcomer Mark Salisbury.

Test 2, a repeat of test one, and once again, Barry & Colin shared fastest time, 56 seconds. Carl on 57 seconds was next, then Jon Ross, Jon Stynes, Helen Harkness and Mark. The first wrong test of the day went to Mike Burke, with Sade Burke also hitting a cone on that test. END_OF_DOCUMENT_TOKEN_TO_BE_REPLACED

The July Autotest ran on a stubble field at the Plump to add variety to the Autotest championship. However, the surface change didn’t attract the entries that I’d hoped. The weather on the day didn’t help but the 10 entered all turned up and had a fun afternoon.

Test 2 – Helen went quickest with 1m25 to lead the event ahead of myself by 1 second, Mike Burke next quickest on 1m29 ahead of Colin Trotter on 1m30.

The second grass Autotest ran mid-June but this report wasn’t written for the newsletter copy deadline the week after so for those of you can remember back, this is how it unfolded.

Fourteen competitors arrived at the freshly silaged grass field at Longpark. Setting out the new layouts a test of routes to be used at the display the club were doing at the Cumbria Auto Show the week later…turned out to it never ran as dust prevented the display happening. However, test one of the new tests was one that no one had ever ran so this event was a leveller. Helen Harkness was fastest with 1m06 just ahead of Nigel Harkness on 1m07. Geoffrey Harkness and Barry Lindsay getting 1m09. Running new tests always produces wrong tests, Phil Hodgson, Andrew, Geoffrey, Mike, Sade & Lizzy Burke and Josh Shaw.

On the second run, Barry got the hang of his recently acquired 206 which was to be broken for rally car spares getting 1m 03, Helen, Nigel, Phil H and Martin Davies were close behind on 1m04 though, then Andrew J & David Garstang on 1m05. END_OF_DOCUMENT_TOKEN_TO_BE_REPLACED

The Summer grass Autotest saw 12 drivers battle it out over 10 tests, it had been planned to run 12 but the weather turned so bad there was no fun for everyone standing around. For the first time we had a BBQ after  6 tests to try and attract non competitors along also.

A quick move of cones and test 3 was ready. Neil Thomlinson was quickest with 1m26 but was suffering from a heavy night out the night before! Nigel got 1m 28, close behind was Helen on 1m29 then Barry on 1m30. Geoffrey Harkness got a wrong test. END_OF_DOCUMENT_TOKEN_TO_BE_REPLACED

First Autotest of 2016 was at Longpark on grass. Nine competitors reved up and ready to get the season off to flying start.

With 12 tests ahead Kenton Pattison led the field away as current champion but pressure got him as far as the third cone when he spun on the slippy grass and had to do a three point turn to recover. The early runners were struggling for grip but some massive slides were being had and almost as big a smiles on faces – although it wasn’t quick.

First test Helen Harkness was fastest with 1m25 just ahead of Jon Fowler on 1m26 the John Barber on 1m28.

On the repeat as Test2 John Ross got 1m22 while John B, Martin Davies & Barry Lindsay got 1m23. END_OF_DOCUMENT_TOKEN_TO_BE_REPLACED

Due to weather and lack of entries cancelling the others The Summer Grass Autotest at The Plump Nr Gretna was the first Autotest of the year.

Eight competitors turned up on a Sunny Sunday afternoon for an action packed 12 tests. The test was using a grass field which had been silage a few days earlier so was it excellent condition.

Test 1. Nigel Harkness was quickest with 1m07 just ahead of Helen Gibbon with 1m08, Barry Lindsay on 1m10 then Kenton Pattison & Andrew Graham on 1m10.

Test 3. We moved area slightly to avoid cutting up the ground. Kenton was quickest with 52 ahead of Barry on 53 then Helen & Andrew both on 55.

Test 4 was a re-run Nigel, Helen & Andrew were quickest all on 53, John Barber got 54 on his first Autotest and had soon got the hang of it.

Test 5 was a new route and a bit more complicated, Barry getting 1m04 but was fighting back after a previous cone. Kenton got 1m05 but he also had be getting cone penalties. Helen got 1m08 and was leading the event tactically mixing precision and speed (Yep, that was exactly what I was doing…errrr…!! – Helen). 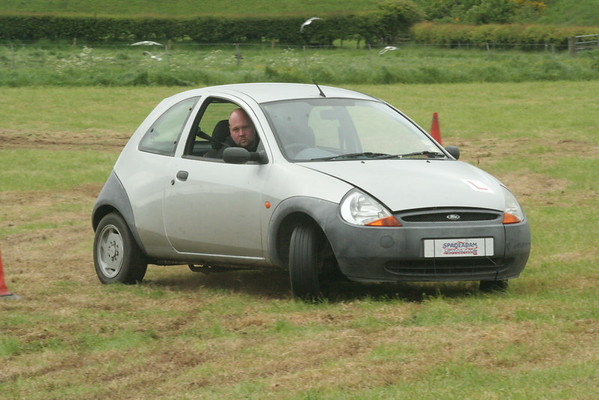 END_OF_DOCUMENT_TOKEN_TO_BE_REPLACED

The summer Grass tests were ran at Longpark in June. Despite rain on the Saturday afternoon it had dried enough to run on the Sunday afternoon. Ian Robinson & Michael Lindsay were the timekeepers for the afternoon while Caroline Lodge worked on the results. 12 tests were run with the final two being a head to head special test.

First test Barry Lindsay was quickest with 53sec only just ahead of Andrew Graham on 54sec then Landowner Joe Thomlinson on 56sec, visitor Jonny Crisp a junior from the North East brought his KA over and got 58sec. John Ross got off to a bad start getting a wrong test. On the rerun Barry got 54sec as conditions dug up a little, Andrew got 56sec along with Geoffrey Harkness. Jonny & Nigel Harkness got 57sec.

END_OF_DOCUMENT_TOKEN_TO_BE_REPLACED

At the end of April it was thought that ground would be hard…well it wasn’t! But the event went ahead with some tricky conditions and would reward those with a feel of grip through there right foot.
Ian Robinson had designed some new routes for the event and set the event off marshalling tests 1&3 while Barry Lindsay ran 2&4 at the same time.

Geoffrey Harkness was fastest on the first test with 1m 06. Nigel Harkness was next on 1m 14 then Andrew Graham & Kieron Stynes on 1m17. John Ross, George Carrick & Alex Beaty all wrong tested.
Test 2 Neil Thomlinson was quickest on 54sec ahead of Nigel on 55sec, Richard Clark with 57sec then Kenton Pattison, Andrew & John on 58sec.

END_OF_DOCUMENT_TOKEN_TO_BE_REPLACED

The June Autotest was held at Longpark in a different field, the field had been unused since finishing combining last autumn. The surprise on faces as people saw the field. The wild growing grass in places would be almost knee height.

Two test sites were set out and with a good entry of 16 competitors and we were pleased to see new faces.

The second round of the Autotest championship was held at Longpark Farm for the first of our grass tests. Ian Robinson was running the tests and had 10 new routes.

First & third tests were marshalled by Michael Lindsay. Geoffrey was quickest with 38 sec, followed by Barry & Richard on 40 sec then Neil T & John S on 41 sec.  On the re-run Richard, John S & Barry were tied on 38 sec, George & John R got 40 sec.