Now an annual event on the Spadeadam Calendar is the NYE Autotest at Pirelli Carlisle. This year increased in popularity with 29 entries if everyone turned up. All of which had competed on SMC events during the year so popularity is increasing.

12 tests were planned during the day and two tests were set up side by side to get maximum runs done. Hampered slightly by an abandoned car meant out area was squashed slightly making tests tighter than planned.

Test one. Peter Wright was joint quickest with 40sec in his nimble mini ideally suited to the layout the same time as Chris Hunter in his MX5. Drew McLean was next on 41sec showing that rear wheel drive MX5’s can compete with mini’s on tight tests. Next was Barry Lindsay in the 106 with 42sec. Quickest Junior was Jamie Barnett using the club car on 49sec. Wrong tests for Mark S, Colin Trotter, Kieron Stynes.

Test two was the rerun. Chris was quickest with a 39sec. Peter matched his first time a 40sec then Phil Hodgson on 42sec then Drew and John Holiday on 43sec. Quickest Junior Jamie on 47sec. Wrong test for Mark, John Ross.

END_OF_DOCUMENT_TOKEN_TO_BE_REPLACED

16 competitors turned out to do the sealed surface Autotest at the Peth. With Helen Harkness taking on the role of organising this one and came up with a great afternoon of non stop action with very little cone moving. The event was marshalled by Ian Robinson, Michael Lindsay & Graham Petry with Caroline Lodge on results and Barry ‘Hop along’ Lindsay on photos (still not able to compete due to a broken ankle).

First test Nigel Moffat was quickest on 48, with John Holliday and Nigel Harkness on 50sec then Helen Harkness and Phil Jobson both on 51sec. Wrong tests for Simon Jobson & Bradley Rutherford.

Test 2 was a repeat Nigel M & Craig Stamper were quickest on 49sec, then Helen, Nigel H, John H and Martin Davies all on 50sec. END_OF_DOCUMENT_TOKEN_TO_BE_REPLACED

On Sunday 8th October Helen Harkness and the autotest team of helpers put on a great afternoon of fun running a number of interesting challenging tests on concrete in a haulage yard just outside Longtown.

The tests were set up so that you ran each test twice and for those of us that are mentally challenged at remembering routes around an auto test they lettered each cone. Now this is what I am use to when competing on the classic and targa events so I found it much easier to remember what the route was around each test. They had set up the first test so that with either no moving of cones or moving one or two cones they were able to run a variety of test patterns in a very quick set up time.

END_OF_DOCUMENT_TOKEN_TO_BE_REPLACED

The third round of the Spadeadam Autotest championship was the Summer visit to the Pirelli factory carpark. The SMC contingent of autotesters getting entry priority, but then friends from West Cumbria joined to make a full entry. 10 good surface tests were planned and with the carpark with not a single stray car we managed to set two tests up to run at the same time.

Test 1, marshalled by Michael Lindsay and Graham Petry,  was set off by Barry Lindsay, with the first wrong test also! He was joined in wrong tests by David Garstang, John Ross, and Paul Hettrick. Quickest was Chris Hunter in his MX5 wth 51sec but had also used 2 rear tyres! Stuart Moffat and Andrew Robinson got 54sec then Helen Harkness on 59sec.

For the 2nd run at this test Stuart got 50, Andrew  on 52, Nigel Moffat and Jamie Stuart on 53sec. Wrong tests on this run for Chris Hunter, Paul Hettrick, and John Barber.

END_OF_DOCUMENT_TOKEN_TO_BE_REPLACED

The New Years eve Autotest at Pirelli is always a popular day on the Spadeadam events list. 20 drivers took part and there had been a few drop out. Thankfully the car park was empty when we arrived so two tests were set up side by side so all 12 tests could be done.

Dry grippy tarmac with a little loose chippings would mean a lot of rubber would be burned and if a sale department had been open at the factory they could have had a roaring trade. Some competitors resorted to going home between runs to get some more spares.

Several West Cumbria competitors came along to support the event and would soon be showing the SMC elite how it was done. Test one was marshalled by Michael Lindsay. Fastest were Stephen Dixon & Richard Cook on 48sec ahead of Andrew Graham on 49, then Kenton Pattison on 51. Wrong test for Chris Hunter, Craig Stamper, Drew McLean and Phil Jobson.

Test two the repeat, Stephen on 46sec ahead of Richard on 47, Andrew Graham on 49sec then Barry Lindsay on 51. END_OF_DOCUMENT_TOKEN_TO_BE_REPLACED

For the October Autotest we managed to get the use of the Peth wood yard for the day. The venue had been used on the Blue Streak with favourable reports and turned out to be another great autotest. Land owners took up the offer of the SMC club car so became a close contest between those two also. With a surface of smooth concrete polished withwagons  turning  on it along with a layer of gritty dust what more could we ask for!

Test 2 was a repeat and now with a clean line Barry got 45sec, Nigel 49sec, Andrew G, Martin Davis and landowner Alan Faulder quickly adapting to the club car to all get 50sec. Another newcomer William Cheesbrough picked up a wrong test.

Test 3, basically the other way round but seamed more complicated. Barry got 53sec, Andrew, Nigel, John H all got 58sec.

Test 4, the repeat. Kenton Pattison debuting his #saxobeast finally got a clean run having hit cones on the previous tests. Fastest with 52sec saw the fightback begin. Barry getting 53sec, Andrew on 56sec then Helen Harkness & Nigel on 57sec.

Test 7 was getting more complicated. Kenton got 1m08, William Cheesbrough got 1m13, Richard C & Andrew  got  1m14  then  Landowners Alan and Andy Thomson both got 1m15. There were wrong tests for Barry (Who’s navigator nephew Graham still argue’s they were right!), Martin, John Barber, and John Ross also got wrong tests.

Test 8 but now everyone had studied the diagram abit more. Andrew & Nigel both getting 1m14, Martin on 1m15, John H on 1m16. Richard C picked up a wrong test on this run.

Test 9 Kenton & Barry were both in fight back mode getting 1m29, Richard got 1m33, John R, Andrew & John H on 1m35. While Helen picked up a wrong test, her first for a very long time, (blame the navigator all drivers do!)

Results from the event, report will be next month.

With 10 tests planned and a cracking entry, our marshals Michael Lindsay & Ian Robinson would be kept busy and only time for a quick brew while tests were changed round and walked.

First tests was the out going years route the 15. Jack Palmer from West Cumbria was soon showing the regulars that the Ka would be the car to beat with a 53sec. Barry Lindsay & John Ross were as close as you can get though on 54sec Then Andrew Graham on 55. Wrong tests for Joe Herring, James McWhir, James Boothroyd and John Barber. 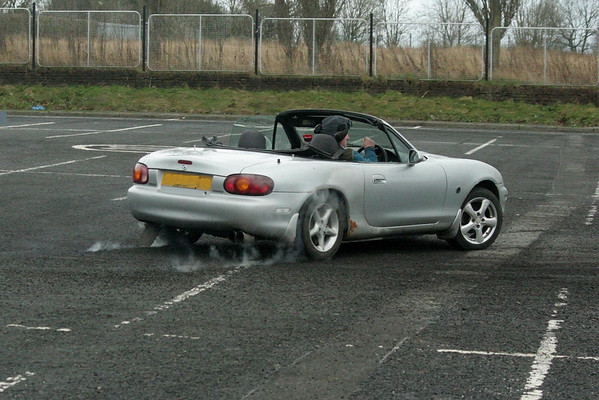 Test 2 was a re-run. Jack was again quickest with 51sec ahead of Barry on 52sec then Kenton Pattison on 53 despite fighting back from hitting two cones on the previous test. Andrew Graham next on 54sec ahead of the Stephen Dixon now with a LSD in the Corsa.

END_OF_DOCUMENT_TOKEN_TO_BE_REPLACED

With 10 tests planned and a cracking entry, our marshals Michael Lindsay & Ian Robinson would be kept busy and only time for a quick brew while tests were changed round and walked. First tests was the out going years route the 15.

Jack Palmer from West Cumbria was soon showing the regulars that the Ka would be the car to beat with a 53sec. Barry Lindsay & John Ross were as close as you can get though on 54sec Then Andrew Graham on 55. Wrong tests for Joe Herring, James McWhir, James Boothroyd and John Barber. END_OF_DOCUMENT_TOKEN_TO_BE_REPLACED

The annual New year Autotest, New Years Eve and Pirelli factory was on maintenance over Christmas se we can use the car park. 12 tests we planned on the tarmac carpark. 12 drivers signed on and walked the tests before driving them. The longer tests was helping to remove the Christmas excess chocolate!

Test 1 Stephen Dixon was quick out the starting blocks in the lightweight Corsa to get 52s, Kenton Pattison was using the SMC club car and he showed its pace getting 56s, Barry Lindsay was next on 57s in the 106, Andrew Robinson 4th also using the Club Car Fiesta getting 1m00. Neil Thomlinson brought out his mini but got a wrong route.

Test 2 was the same and followed on Stephen repeated his first run 52s, Barry tried to close the gap with a 55s, Andrew Graham got 58s in the throaty sounding Fiesta ST. John Ross & Andrew R both got 1m00.

Test 3 was different route but Stephen was still quickest getting 45s, John & Barry both got 47 along with Neil Thomlinson who was suffering overheating problems with the mini but had got the hang of it.

Test 4 Stephen repeated his time again with 45s, Barry & Andrew G were only a second behind then Kenton on 47s.