I’d firstly like to thank the motor club for organizing such a fantastic event and the competitors who took part making the day all the more fun and challenging.
So I was first to go down the course which possibly wasn’t the best idea after last year.. But anyway I got to the finish with a clean run and a decent score of 1m 05sec.
Next to go was Uncle Barry. He ambitiously took the corner with a lot of speed and found himself upside down in the hedge, a quick recovery but set him back a bit of time to record a time of 1m 16.

Helen, Nigel, John Ross, Martyn & Shaun followed shortly afterwards. The leader board after the first run was positive position for me as Martyn sat in first, Helen second, Shaun joint third with myself. John was 5th, Nigel 6th and Uncle Barry 7th. 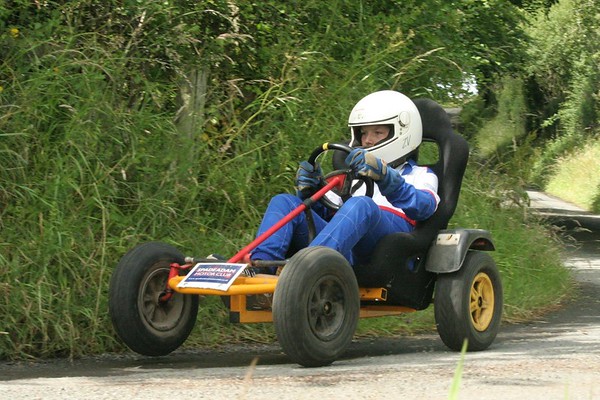 However on the next run the leader board flipped with Uncle Barry bringing the time down with an incredible 55 sec along with Helen on 57sec. John and Nigel eased in front of me and Shaun leaving us last so far.

The third run was where the excitement and competitive edge really did kick in. Knowing that everyone of us had a shot of getting quickest run on the Soapbox Rally.
The leader board after the third run was almost the same, Uncle Barry, Helen and Martyn on the podium and me in last.
However the fourth run was superb I finished with an impressive 57sec leaving me joint 3rd with  my older brother Martyn. 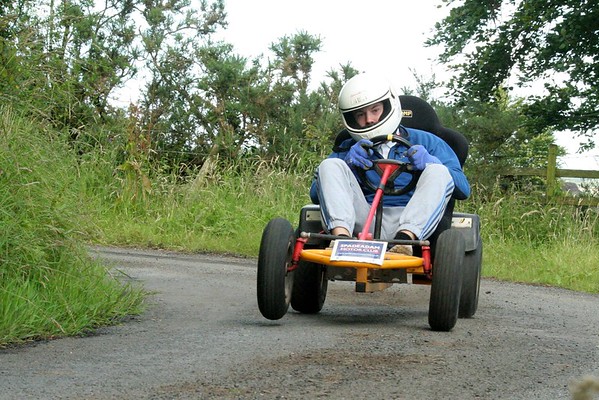 The last run was where the nerves kicked in, Martyn taking a run into the hedge, me on two wheels and Shaun “forgetting” to brake on the deceiving and sharp corner. All the soapbox’s looked the part and were still on one piece, and some are easier to drive than others.

Anyway the quickest run leader board was too close to call. In first place with an astonishing 52 seconds was Uncle Barry, in second was Helen with 54seconds, Joint 3rd were me and Martyn on 57sec, 5th was Shaun on 59sec, John with 1m00 and 7th was Nigel on 1m01.

I would once more like to thank the motor club for hosting such an incredible event and well done to everyone who took part.