This year’s stages were fantastic. Except the first half of Hobcarton, that was almost too rough to use). We  also had a slight issue when the engine didn’t pick up off the start line for the first ½ mile. There were no dramas in SS 2, everything went well, we’d moved up to 4th in the historics. A quick trip to management service, a wheel nut had been damaged and this delayed our run to stage 3, but we’d now fitted the new rubber on the rear that would see us through the rest of the rally. 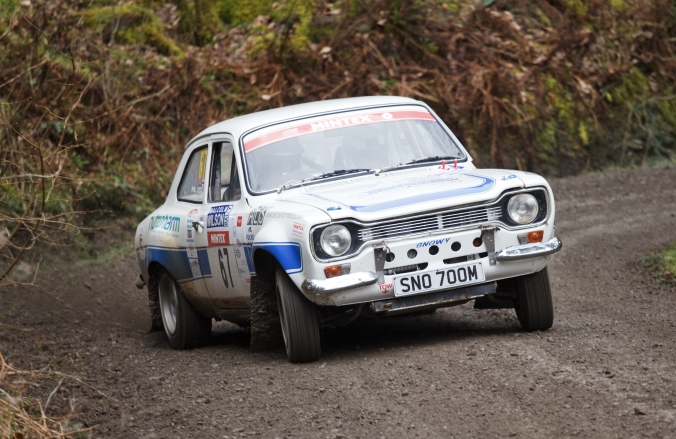 Into stage 3, we had a spin and stalled in on a “Sainz’s hairpin”. This meant we’d lost about 6 seconds and saw us move down to 6th historic dropped us from 47th to 54th. We reckon any Arrival Board must’ve been obscured by Marshals, Spectators or Officials Cars cluttering that area. This coupled with a bit of a hesitant start, then backed off in the fog at the end of the stage.

The road sections were not straightforward this time, we got caught up the traffic caused by an accident involving a cyclist and we had to find a route back to service around it. After a few wrong turns here and there, we made it back to service.

Then we headed back to Greystoke for the final stage of the event, stage 7. Still smooth, no dramas and we were happy to finish ­ 54th (4th in class) and 6th historic crew.

The condition of Greystoke was superb, and a joy to drive. Though I’d backed off a bit too much for the first square right. We had moved back up to 4th by the end of it. We’d fitted a higher ratio diff to, which meant we saw the shift light flash much more often!

After service, we then headed down to Grizedale for stages 5 & 6.

Stage 5, Grizedale North, was excellent throughout, we were 20seconds off Bannister’s time! We were very disappointed to have fallen foul of early arrival to South Grizedale and that penalty