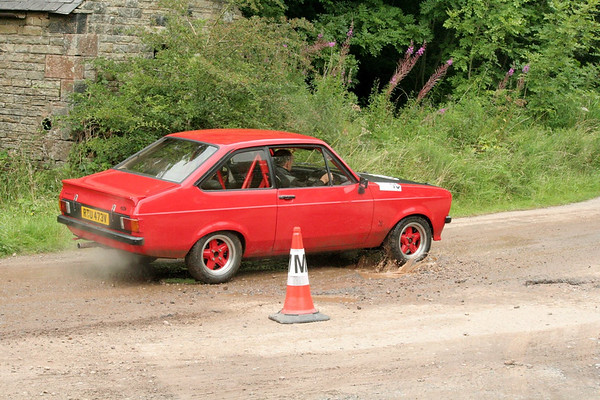 On the warm up to this event dad and I did a couple of autotests at Longpark and Pirelli car park. I enjoyed the driving and even managed to set one or two good times. By the time we arrived at this event, I started to get the idea of how to read the map, although I wasn’t sure about the timing and the time cards but dad said “don’t worry it be reet”
After scruitneering at C&C Barnett, Townfoot we went to signing on where I actually had to sign my life away!!

Helen and team gave me a folder loaded full of paper which we took back to the car and started to look through. With hindsight I should have made my notes clearer.

10:28 we booked out of MTC1. I wasn’t nervous but when dad said we have 4 mins to get to Farrer’s Haulage Yard, I’m thinking “what’s going to happen next!?”

Simon and Phil were just starting when we arrived. We watched and then it was our turn… I handed my time card to the marshal and then he counted down with his fingers… GO!

We set off and I was immediately calling “my side A, your side B!” The route looked big on paper but we were on the finish line before I knew it and I wasn’t at all sure how well it had gone but I was excited for the next test.

Onto Brampton tests 2, 8 and 10 which were really confusing, we need to find a better balance between speed and me reading the notes but it felt good to be among the crowd, swerving in and out of the cones and even getting a cheer from a good 180 degree slide around cone O on test 2.

My favourite test was The Peth where it was simple to read meaning we could go fast round the test, do drifts and know we weren’t going wrong. It was the test where I felt we had done really well together.
The last few tests were a bit messy, but overall we had a brilliant day even though we only came 31st overall. Bring on the next event.