Maybe I’m being a little melodramatic or alarmist as it hasn’t happened yet but the death of forest rallying might be closer than we think. We have to accept that rallying, as we have known it, is now dead. Due to the deaths on last years Jim Clark big changes are coming our way and we have to accept them. You only have to read the open letter that Rob Jones, Chief Executive of the MSA published after the Wyedean to realise the future of forest stage rallying is in the balance.

At our recent Awards Night, guest speaker, Mike Faulkner expressed his concern over how rallying would change with the safety initiatives that are starting to be implemented by the MSA. As we all know the Scottish Government have investigated and reviewed rally safety, they have made recommendations, some of which have already been implemented on Scottish rallies and they will soon be coming to the rest of the country. The MSA is also coming under Health and Safety pressure from the Forestry Commission who themselves are reviewing and implementing improvements in the safety of their own industry. Rallying is probably safer now than 20 years ago but with the explosion in social media even the smallest misdemeanour is broadcast to thousands of people and is sometimes blown out of proportion. Society has changed with the advent of Ambulance Chasers, sorry, Accident Claims Lawyers so that common sense and taking responsibility for your own actions have flown out of the window. You and I know it’s going to hurt if we stick our hand into a roaring coal fire but there is a section of society that would do it and then sue the owner because there wasn’t a fireguard. Therefore rallying must also change!

So how is rallying going to change? Event organisers will have the biggest headache because they will have to change their attitude to event planning. No longer will their first priority be to plan an interesting, challenging route for the competitor, instead they are going to have to think safety! Is the route safe for spectators, are there ample safe spectator viewing areas, will these areas be free of injury causing obstacles, will there be enough Marshals to man the route and more importantly the Spectator areas. If they haven’t done it previously they will have to carry out Risk Assessments of all parts of the event and more importantly they will have to have written evidence. It is no good saying that they’ve done their best to run a safe event, they have to be able to prove it. They will come under stricter supervision from the MSA. Rallies have always had an MSA Steward overseeing the event to make sure they comply with the rules and regulations but now there is also an MSA Safety Observer to obviously observe the event is safe and at the moment on Scottish rallies there is also an MSA Delegate who travels through the stages with the Course Cars. If he is not happy with any aspect of the safety of the stage he has the power to cancel it. Soon there will be a Safety Delegate on English events; he will even be on the Pirelli in April because one stage mile of the rally is in Scotland. That is how seriously the MSA are taking the topic of safety.

Organisers will also have to ensure they have enough Marshals to run the stage safely; they’ll also have to declare their location within the stage. The days of running a stage with only Radio Crews on junctions in the stage are over. The MSA have also issued a statement on rally media access essentially saying that wearing a Media tabard doesn’t give you any extra privileges over a normal spectator. At least that should make it easier for Marshals to move Media from unsafe places and reduce resentment from spectators.

What of Marshals? Well we’re not going to escape new regulation either. A new Marshal’s learning scheme is being developed and you’ll have to learn it to be registered as a Marshal and you’ll have to be registered to Marshal on rallies. Now I know what it was like when the current registration/training scheme was introduced, the old hands threw their arms up in disgust and moaned that they’d been doing it for 20 years and they didn’t need to be trained. The same will probably happen again but let’s be honest, I’ve been Marshalling for over 20 years but that doesn’t mean to say I’ve doing right all this time. I did attend a training session at the Hilltop Hotel several centuries ago but I can’t remember what was said there so maybe I do need new and up to date training especially as it’s all going to change. When I go out Marshalling it’s usually to help a friend, to contribute to the smooth running of the event and to help make it safe for competitors. In future, if I go, it will be primarily to make it safe for spectators. I’m not sure I want the hassle of controlling spectators, I don’t like them, some are clueless e.g. the teenage girlfriend in dress boots with 6 inch heels walking along a gravel stage, some are drunk and some are just plain pains in the ****. I’m sure quite a few Marshals feel the same way but for rallying to survive we’re going to have to put our prejudices behind us and make the best of it. At a recent meeting the MSA put forward the idea of conferring ‘Grandfather Rights’ on experienced Marshals but the Scottish Government Safety Representative seconded to the MSA would not hear of it. I think a new training, learning scheme is a good idea; everyone will be reading from the same hymn sheet and will know exactly what’s expected of them. I believe the new ‘learning package’ will be based online so should be very convenient to complete and probably a better way to take it in. No need to travel miles to spend 4 hours being lectured.

We are in a period of procedural changes and will be for some time to come. I’ve just heard that the Border Counties Rally cannot run as they usually do, with the 2 wheel drives ahead of the 4 wheel drives with a safety gap between them. The MSA has decided that stage rallies must now run a single field seeded in order of anticipated performance. They have taken this decision on spectator safety grounds after reviewing reports from their observers on the first two rallies this year using split groups. One effect of this decision could be a decline in entries; the Malcolm Wilson Rally ran the 2 wheel drives at the front of the rally in reverse order. This meant that the smaller lower powered cars ran on relatively smooth roads, running down the order on roads that have started to cut up will not appeal to these drivers and could also cause more damage to their cars. This could cause them to enter less events or even stop rallying altogether as repair costs might increase. A lot of rallies struggle to get sufficient entries as it is so we might find more rallies being cancelled due to lack of entries. This is an example of running rallies for the benefit of the spectator and not the competitor. I’ll be interested to hear the reasoning behind this decision as initially it seems to have as many negatives as positives in regard to safety; but by the time you read this we’ll know a lot more about it and possibly other changes.

Well it looks like we’re in for an interesting few months, hopefully rallying will still be here and we’ve adapted to the new ways and are still enjoying it.

I’ve included both the post Wyedean open letter and the Media statement for Helen to include in the newsletter subject to there being enough space for them. It could be a struggle for her, as I know you will all be sending in articles for the newsletter. 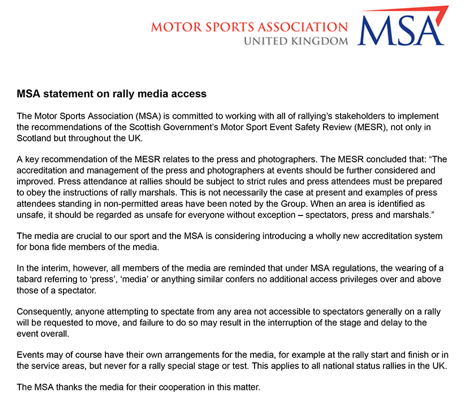