The second round of the North of England Tarmac championship and the opening round of the ANECCC championship  was the Jack Frost Stages on Croft early in January. Weather had plummeted in temperature following the tropical Christmas stages but crews were welcomed to a wet Croft for the event.. Two Spadeadam crews competed after the third car Nigel & Helen Harkness didn’t manage to get the engine rebuilt in time after the damage sustained on the Christmas stages only a few weeks before. 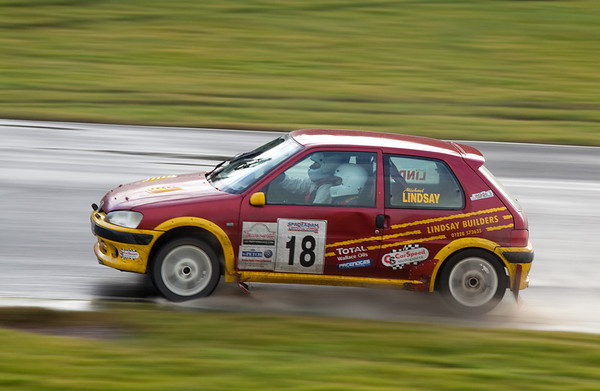 Barry & Michael Lindsay were out with the 106 seeded at 15, while Kieron & Jon Stynes were at 77 of the 80 starters on only Kierons 3rd rally. The 205 he’d be in would be quite a bit smaller than the Volvo Estate he used for the club Autotest days before.Barry & Michael were struggling with following slower cars in the twisty bits but unable to pass on the straight bits. They ended up following the same white Evo on 4 of the first 5 stages, each time for at least one lap sometimes two laps.

The 106 also suffered alternator failure on stage 2 so in the one hour service it was changed but it’s not easy when everything is hot and bumper, front panel & sumpguard are to take off just to get at it. Minutes to spare it was changed, only for the spare to burn out on the last stage the light dimming as they got back to service lucky to finish.

Kieron and Jon were setting good times by using the doors and mirrors to widen chicanes on the first lap so they could take them straight through on the second! The 205 looking a little battle scared by the finish but a great result.