After an eighteen year wait, it’s 5am on a frosty Sunday morning and we are setting off to the Jack Frost Stages for Kieron’s first rally in the driver’s seat (and dad in the silly seat!). The 205 has been prepared by Barrie Thomson at ALS Performance who is also servicing for the day, so we just have to arrive and have fun.

Kieron being his normal laid back self is showing no nerves, whereas I am slightly anxious to what is going to happen today and still wondering whether it’s too late to swap places! In reality he has only competed in autotests and has been on the road for 3 months mainly driving a 1.1 Metro. So sitting b ehind the wheel of a 200hp rally car is definitely going to be an experience.

Stage one, sitting on the start line, me tightening my harness one more time and Kieron giving it plenty of revs, 5,4 3,2,1, go! and we’re off. I was hoping for a cautious start from Kieron, but no, he was testing the track limits and his own ability straight off. Lap two of the stage saw us in the gravel at the end of the pit straight, but he kept it going and powered off at maximum attack up the back straight, locking the wheels at the the top corner and shunting a tractor tyre out of the way and destroying the front valance on the Pug. Next to go was my door as he attacked the bale chicane. By now I was glad to see the finish line. As we returned to the service area, Kieron’s comment was “don’t worry dad, I was just finding the limits”. I hope he realises it is the driver that does the repairs after the event! 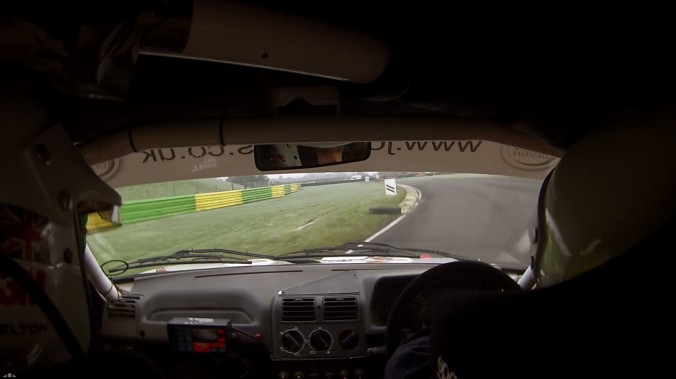 Kieron picking up a marker board.

Stage two saw us with a stage maximum, all because I missed a split and we did an extra lap! I could say it was my first event co-driving but as Barry said “You only have to count to three!”.

With the problems we had on the first two stages, the car mis-firing badly and a wrong tyre choice, the day could only get better.

As we set off on stage three, with a lot more power and probably twice the grip, I could see the smile on his face as he comments “that’s more like it!”. Picking up the pace throughout the stage and catching the car in front, even with a slight mishap at the complex which saw us off the track, picking up a marker board he was now settling in for a good rally. It was always going to be hard to get back the five minutes we lost in stage one and two, but we were going to give it a go.

The last stage in the dark saw Kieron on a mission, time to tighten the harness again! We knocked 30 seconds off the stage seven time, nearly caught an escort and made up 30 seconds on the car in front. A great way to finish the event.

Kieron & Jon , on the last stages of the Jack Frost Image © Kev Hutch

On the trip back home, now realising I have a new permanent role as co-driver, and trying to decide on which event to do next, I realise that Kieron is hooked. I don’t think I’ve seen him smile as much in one day.