The Dmack Stages was round 7 of the SG Petch ANECCC championship and this year a round of the BTRDA. The event attracted a massive 130 crews. A good turn out of Spadeadam members at the event both competing and marshalling. Members were running the service area controls as well as the finish of stage 1 and instage junctions.

The first stage was GlenDue in Kershope, Late entry Rory Young & Allan Cathers ran with 130 but were running in the top ten. There new R5+ car, 4th fastest time of 7m 20 was a good start. Peter Taylor & Andrew Roughead were first of the Smc crews on the road, seeded at 19 but then on the day moved up to 4th car on the road, loose dusty conditions cost them alittle on the first stage 7m 24. Rob Graham & Helen Gibbon were next quickest of the SMC crews getting 7m 49 in the Mk1 Escort, Darren Martin / Martin Steele got 8m02 in the Evo. Phil & Caroline Jobson got 8m09 in there Mk1 Escort. Barry & Michael Lindsay got 8m13 in the 206 but had opted for soft compound and the hot, dusty conditions they were the wrong choice.

Mark Shaw / James Coxon were next in the Sunbeam getting 8m22, followed by Mike Martin / Kyle Gass in the Evo getting 10m43.

Stage 2 followed straight on. Peter & Andrew were fastest overall with 4m52 on a stage which caught out several top crews all hitting the same rock. Rory & Allan got 5m06. Darren & Martin got 5m24 the same time as Barry & Michael who went better on the stage which was mainly in tree’s and the surface damper. Phil & Caroline were just behind on 5m26, then Mark & James on 5m40. Rob & Helen followed with 5m52 then Mike & Kyle on 6m51.

A quick road side management service on the way to the Newcastleton Stage.

Peter & Andrew were again fastest overall with 7m51. Rory & Allan were 3 fastest getting 7m54. Barry & Michael were next on 8m52 and headed back to service on destroyed tyres. Darren & Martin 2 seconds behind on 8m54 then Phil & Caroline on 8m58. Mark & James got 9m21 but had damaged the manifold of the Sunbeam and were looking for a welder at service. Rob & Helen got 9m50, then Mike & Kyle on 12m12.

After a service back at Murrays yard at Longtown, crews headed to Chammot Hill.

Peter & Andrew were in a battle with David Weston and were swapping seconds on each stage. Dropping 1sec on this one with 3m33. Rory & Allan had retired in this stage, and returned to service on a tow rope. Darren & Martin got 4m09 then Phil & Caroline on 4m14. Barry & Michael now on harder tyres but the issue with this stage was the condition. Large rocks strewn across the road and hitting underneath. 4m16 was the time just ahead of Mark & James on 4m25. Conditions hadn’t improved when Rob & Helen went through getting 4m54 then Mike & Kyle on 5m42. 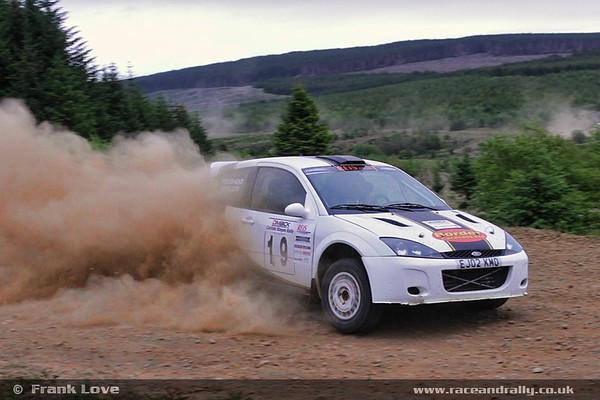 Peter & Andrew were joint fastest and finished 2nd Overall (11 seconds behind) with a time of 13m44. Barry & Michael got 15m41 despite hitting trouble only a few miles in when a rock impacted the sumpguard bending its mounting and breaking the power steering rack. Darren & Martin got 15m44 then Phil & Caroline who had stopped at a car which was off, they then got a notional time of 15m55. Mark & James were struggling with the damaged exhaust and got round with 16m46. Rob & Helen were yellow flagged mid stage due to a car blocking the stage getting a notional time of 18m46. Mike & Kyle got 20m 08. 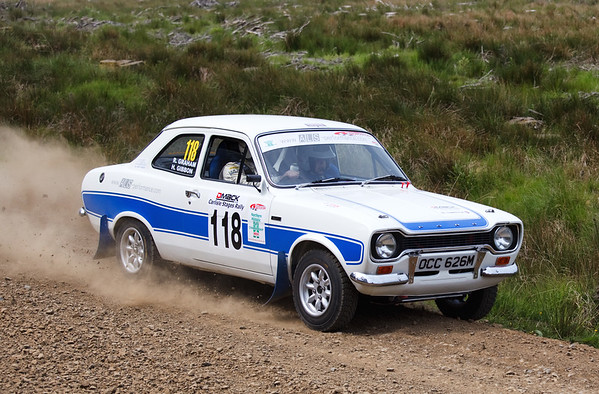