No, I’m not going to write about people like our Newsletter Editor although I will say that Helen does a marvellous job with the limited contributions she receives I’m sure her compact dimensions have nothing to do with it.

I have long had a fascination and appreciation for small detailed creations especially if it’s a small-scale replica of a full sized item. I’ve even found myself looking at Lillyput Lane pottery houses but the less said about that the better. It probably all stems from when I was a young child and discovered Matchbox toys, younger members Google it. I thought it was great that you could hold a car or even a lorry in your hand. Of course as I got older I turned to Airfix kits, most of which were aircraft but there were a few cars in their range and amazingly some are still current models. They include E Type, Triumph TR4A, Triumph Herald and 4½ litre Bentley. I did assemble a few aircraft kits but only so I could set fire to them to watch them crash and burn in the dark. Health and Safety warning, don’t try this at home kids, melting Airfix kits and skin cause tears if they come into contact with each other. 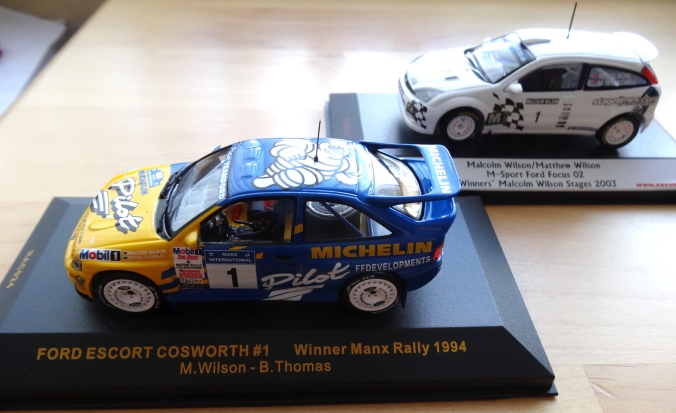 After watching films such as Duel and Convoy and selling Foden trucks for a year or two I moved on to building plastic 1/24th scale American truck kits. British and European trucks just weren’t available at that time. The problem with plastic kits is that once built they are quite fragile and bits drop off when you touch them. They were also long, a tractor unit and trailer were nearly 2 foot long. I needed something stronger and smaller so in the late 70s, the 1970s that is, not my 70s, I discovered white metal kits from Grand Prix Models (GPM). Despite their name they also produced kits of rally cars in 1/43 scale with the Eaton Yale Mkll being one of their first kits. Some of the early castings were a bit rough and lacking in detail but they could be filed, sanded with wet and dry and sprayed with car paint aerosols. If you used car paint on plastic it had a tendency to melt. GPM also sold kits by other manufacturers, mostly Continental, but the only way to find out about them was to take out a paid subscription for GPM’s monthly newsletter which mainly consisted of low resolution black & white photos of the built version of kits they were selling. It was difficult to get a clear idea of how accurate the kit was until you’d parted with your money and the kit arrived in the post. Some of the kits were poor quality but once you paid your money you were stuck with them.

But all that changed with the appearance of Classic Models in Lowther Street owned by Geoff Deakin. Geoff was an ex car salesman, motorsport enthusiast and in the mid 70’s competed in Sprints and Hill Climbs using an ex James Hunt F3 March. Around this time French firms Starter and Provence Moulage started producing models in resin, which were a lot finer detailed than white metal. Unfortunately Geoff always had the latest releases in stock, I say unfortunately because once you opened the box and saw how good they were you just had to buy them especially when they started producing Group B rally models. The problem with model kits is the time it takes to prepare, paint, build and apply the decals to them although completing them does give you a great deal of satisfaction. So by the time Classic Models closed I had built up a collection of over 100 un-built kits so although I missed the shop it did give my credit card a rest.

There had always been die cast metal cars produced mainly by Corgi and Dinky in this country but I didn’t class them as models as they were made in assorted scales and lacked detail, they also had opening doors which, as they were out of proportion spoiled the look of the vehicle. As the years passed I noticed that die casts were improving and suddenly found myself buying Corgi 1/50 scale trucks as there were some great colour schemes and the castings were very detailed. European manufacturers were also bringing out detailed die cast competition cars in 1/43 scale not just current cars but also older ones, even dating back to the 50s and 60s. For once rallying is not the poor relative to circuit racing as there is a great variety of models and rallies available. Now you can even get detailed 1/18th scale die cast cars, some at reasonable prices like the Sunstar Mkll Escort and other exceedingly detailed models from companies like Exoto and CMC costing hundreds of pounds.

Today there are many different manufacturers producing a wide range of models so that with the Internet you can find a model of virtually any car. A lot of people start collecting a theme such as Le Mans cars, Escorts, etc but it’s not always possible to restrict yourself to one theme, I speak from experience. I buy with my heart, and an overloaded credit card, not my head. I buy for many different reasons but mainly because I like the look of a certain model, which means I’ve a very strange and diverse mix of models. I’ll tell you more about them another month unless you inundate Helen with contributions and she doesn’t have room for my ramblings.