Sometimes, life is just so difficult that it is hard to come to terms with the trauma and stress of it all………………….. !!!

Such was the weekend I spent on Scotland’s iconic hill climb the ‘Rest and be Thankful’. This fantastic stretch of road was first used as a hill climb in 1949, the year before I was born! In its time it has hosted drivers of the calibre of Sir Jackie Stewart and the late Jim Clark. Raymond Mays, the elder statesman of British Motor sport held the record for the fastest time over the 1.6km (1 mile) sprint course with a time of 68 seconds, and that was well over 40 years ago!

It is over four decades since the glen was last used competitively and the rally test day organised by John Parker and Brian Kinghorn, brought back a flood of memories to the many fans and spectators who gathered in the car park above the hairpin. This time, it would not just be the 1.6km hillclimb section that would be used, but the entire 4km from the bottom of Glen Croe to the traditional finish line above the hairpin.

The road has recently been completely resurfaced from its previous crumbling decay, to a single track motorway standard surface, capable of handling modern day traffic. If you are of a certain age and listen to Sally Traffic on Radio 2, you will oft times have heard the announcement that the A83, Arrochar to Inveraray is closed due to landslips. When that happened, and it happened frequently, the traffic to and from the West had to make an 80 mile detour via Crianlarich. The newly resurfaced road now acts as a relief road when the A83 is blocked and traffic is led in convoy through the glen. 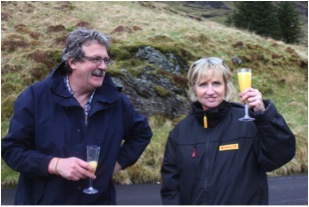 Stephen and Linda raise a glass to the newly resurfaced Rest

The spectacular glen and the road are privately owned by Diane Davidson-Kinghorn, wife of Brian’s brother Stephen. Diane inherited the land from her father Andrew who was and still is a complete petrolhead. The toll for using the road is a bottle of decent malt whisky. Stephen and Diane’s home at Coilessan on the shores of Loch Long is a veritable malt whisky collector’s paradise.

Thankfully Diane has inherited her farther’s petrolhead genes and for those of you who have been in her company or seen her drive on the Pirelli and other events, she is more than capable of setting her own hillclimb record.

The low profile event on Saturday 24th attracted 12 crews with an assortment of vehicles ranging from the WRC Hyundai to a very fast and tidy Peugeot 206 piloted by a trio of young local lads. The cars run the Rest from bottom to top and returned to the start area via the A83, so the round trip was around 9km. There were no restrictions as to the number of times the competitors could run the hill and including recce cars; a local ambulance encouraged along by Harold our marvellous recovery medic; and a Japanese motor sport guru in a hire car; we managed 159 runs of the road throughout the day! The awesome fire spitting Hyundai sadly had to go home early, as it had completely swallowed all of its 50 litres of fuel. The car was apparently averaging 1.7 litres to the mile. However, the event provided fantastic value for money for the entrants and the ear to ear smiles on the faces of everyone present told the story.

The Mitsubishi against the stunning backdrop of the Rest.

I was fortunate enough to be manning the radio control by one of the most exciting sections at Stone Bridge near the top before the hairpin. The line across the bridge is unsighted and you aim at the stone parapet. We had placed cones on the approach to push the cars into the centre of the road and lessen the possibility of the newly refurbished bridge being totally destroyed. Nevertheless, it was an incredible experience to witness a MK 2 on full chat coming across the bridge.

The sound of the cars echoed up the glen and somewhat like a low flying aircraft, the sound followed on several seconds later than the car. The sun shone all day and burnt my face to a frazzle, but at least the breeze kept the infamous Argyll midges at bay. Dozens of spectators lined the top of the Rest, and John in his fantastic ‘gourmet burger van’ in the car park, completely run out of the 36 dozen rolls he had brought with him by early afternoon!

It really was one of those ‘once in a lifetime’ days that will stay with me for ever. There is so much fondness for the Rest and this grand old road presented one of the toughest challenges in British hill climbing. It was simply amazing to be part of such a day, when for the first time in 44 years the glen once again came alive with the roar of engines in anger.

A picture tells a hundred words, so if you log on to ‘You Tube’ and type in ‘Rest and be Thankful – Rally Test 2014’ you will be able to view the CPL Motorsport video which lasts for 7.06 minutes and at the time of writing this, has already been viewed over 2300 times. Those seven minutes of footage will help you understand why we all came away with the fantastic feeling that we had opened another chapter in the motorsport heritage of the Rest and be Thankful.