Castrol Edge & Motorsport News ran a competition to find a rally star. The competition was advertised in Motorsport News and they were looking for someone who had achieved outstanding results beyond what would be expected of them. They must also go to great lengths to do as much as they can for their Motor Club and generally promote rallying. When it was announced I thought I could have a chance at that.. I needed the backing of the Club then I needed to write my motorsport CV. With all paper work submitted I awaited a phone call.

Weeks later and no call came so I had admitted the fact that I hadn’t made the final. Then I got the call “Would you be able to get to Castle Combe for the final, we’ve had 100’s of entries and it had taken longer than thought to find the final six?” Sure I would. 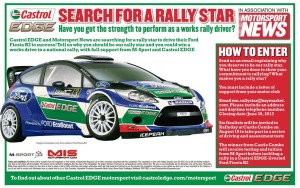 The 6 finalists would go head to head with the winner getting a day’s testing in a Fiesta R2 then a ‘works’ drive in the R2 on the Cambrian Rally in October. The event was only notified in the final instructions before that it only said ‘A National Rally’ I had imagined either pushing it to the limit over the yumps and bumps of Otterburn on the Cheviot or venturing into the woods for Grizedale or the Galloway Hills both events I had done but that now wasn’t going to happen.

The Final, Friday afternoon and travelling the length of Britain on the M6, M5&M4, four of us, Caroline (I had to take a representative from SMC to take part in the Question & Answer Interview with the judging panel) Jonathan, Michael & Myself. Six hours later we were at our Travel Lodge for the night. Early morning start and to Castle Combe we went and to the meeting place where we were met by Jenny the Castrol Organiser.

Finalists had a drivers briefing where we were told we were doing four laps of a gravel oval, interviews then in the afternoon two laps of the racetrack (one sighter then one to have a go!) The runs wouldn’t be timed and don’t damage the car that would go against us. It was a new car and to change up at 6000rpm.

The gravel runs started and I was forth to go so I had a bit of time to watch and see what the others were doing then it was my go. Strapped into the R2 this looked complicated.. I tried to remember all the tips that Martin Wilkinson from CA1 had given me. Having never driven a sequential gearbox I had to find out a few tips. Off the start line for a sighter lap and keeping the foot down and without the clutch pulled on the gear stick then again into third ( wow that’s good!) then steady into a hairpin pushed it twice as I braked and pulled the handbrake..Well that didn’t work on loose!! A round the rest of the lap steady but giving it go when I could see. Now to start increasing the speed and the flat shift gear change was good and the handling on the loose was smooth damping out the bumps but the four laps were soon over and nothing hit.

After a short break it was time for Caroline & myself to face the Judges, Donald from Castrol, Gerard Quinn from Ford & James Attwood from Motorsport News.

They wanted to know my life story of rallying & marshalling of other events. Caroline was asked about what I did for the club. The twenty minute interview was over and we thought we had covered all points we needed to get over.

I was the third to go of the finalists and the R2 was still on the same set up (Yes forest tyres on hot dry tarmac) When it came to my two runs and the first run was safe but getting to know the grip… there was a lot of movement and the car squirmed about a lot, on the long corners it was going in sideways. The second run was fun, Ott had barely said a word but between runs he said “Rev till 7000 and forget the handbrake it’s not working!” So I did!!  This run was good, getting nearer the grip level keeping it smooth to hold good speed through the corners with a little drifting!!!!

We’d done as much as we could it was now in the hands of the judges. I now suddenly needed to eat… for the first time today!

Some spare time to see the rest of the show before needing to be back for the announcement of the results at 4pm.  The time arrived six finalists waited at Petter Solberg announced the winner. We all waited and then he said it… Phil Kendal.  Oh well it wasn’t to be. (That’s the clean version anyway!)

Thanks to all that helped to get as far as I did, particularly Caroline, Michael, Jonathan, George Rutherford, Martin Wilkinson, & Glenn Patterson for all the PR (and the above photo.).