The Christmas holidays annually mean time for a freezing at Croft. True to form this year had been colder than ever, severe frosts, and a few inches of snow met the crews for Scrutineering. Pre event checks were done on the bank holiday Monday and the track had a couple of inches of snow on it, and more was forecast overnight. The Tuesday morning dawned wet; the snow had turned to slush but with ice below.

Jemma Bellingham was the highest seeded of the Spadeadam Crews, sitting in with Ryan Champion in the Subaru at 3. Barry & Michael Lindsay were at 17, Geoffrey Harkness & Caroline Lodge at 31. Barrie Thomson & Jerry Hettrick were on there first event together and were a late entry at 98. 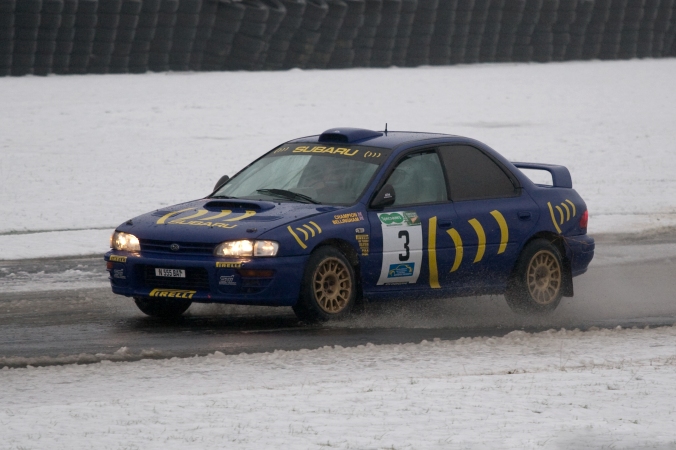 Tyres were going to be an issue, Barry & Michael bolted on a set of road winter tyres obtained from Denton Tyres.  Ryan & Jemma struggled being one of the first through but got 12m 33 on the 6.5 mile stage (that’s nearly 12 car average times). 12m 26 was the fastest time a KA running back in the pack when the track was clearing. Barry & Michael had a spin and had to reverse but got 12m50. Barrie & Jerry got 13m28 using Maxsport Ice tyres, while Geoffrey (suffering from flu) and Caroline got 14m33 using worn forest tyres.

Stage two was a repeat but the track was improving with every car, most crews went two minutes quicker. Ryan & Jemma got 10m 29 putting them the lead. Barry & Michael got 10m 52, then Geoffrey & Caroline on 12m13. Barrie & Jerry were in trouble the engine cut out for 5 minutes. Stages three & four were very similar but with slight changes. Stage 3 Barry & Michael had climbed up to 7th Overall and within seconds of the class lead but then on the repeat of SS4 a timing error would cost them dearly. Despite checking check sheets nothing could be done, 44 seconds were lost. On top of that one of the ice tyres had been damaged. Jemma also lost the lead on stage 4, almost 30 seconds were lost with and engine misfire & a stall. Barrie & Jerry decided not to risk any engine damage when the 106 cut out again on SS4.

Stage 5 & 6 were the other way round, Conditions were still tricky with a clearer line but to overtake off line there was still ice. Barry & Michael now on forest tyres were dropping time to the class competitor partially due to sliding the car too much and coming to a stop in places.

Stage 7 the final stage was run as it got dark and also getting foggy. Armed with borrowed HD lights from Caroline, Barry was warned he had to use them! Onto the stage despite clipping a full row of tyres on a slippy bit! But due to the fog, Barry hoped Caroline would understand and resorted to going onto dip beam!  Geoffrey & Caroline had the same visibility problems.