I first met Ben about 9 years ago when I was in the early days with CarSpeed Autoparts. He worked on repairing vans and over the years we have got to know each other and have become good friends. Latterly he works as a Plant Machinery mechanic specializing in electrics and has become well known for his modified Mk6 Transit which now appears with Carspeed at the Cumbria Auto show.

Being cockily confident (and I owed him a favour after he looked after the stand at the show) I thought he would do well navigating on the Blue Streak Targa rally, so I asked him if he was interested. He jumped at the chance, saying, “No probs, ah can do that, eeezzzee!”

Roll on August, entry in, accepted, time is passing, and I keep saying,

“No probs, it’ll be eeezzzeee” “My side, your side, eeezzzeee” is the reply.

Thursday 9th August, I convince him to find some bollards and we’ll have a drive round Huntley’s Plant and Access yard and work out a system.

First run, Ben is in a sweat and has gone pale……” S—t, this isn’t eeezzzeee”.  After several attempts we finally have something to work on and know it won’t be chaos. Ben has now realised he has to get his head round the note system.

Sunday August 12th. The Transit Mk6 marked up with CarSpeed Autoparts logo and “support vehicle” (you never know with a Mk2 Escort). Scrutineering at C&C Barnett, Townfoot, Brampton.  The heavens have opened, and it is lashing it down making it terrible for the organisers and marshals and not easy for competitors trying to keep windows clear.

I set of in a Mk2 Escort, Ben sets off in the Phantom!

“Slow down” He’s half way through the carpark area as I’m just arriving in it. “Slow down” I’m shouting. Luckily, I remember the mistakes from last year and with Ben realising where we are, we find our way round and arrive at the finish, chaotic but pumped up and having a laugh. Stage 1 clear.

Test 2 on the gravely run way was more settled for him but scruffy from me trying to drive the Escort as smoothly as possible and not wasting too much time sliding all over the place. Test 2 clear, Test 3 clear, Ben is getting into his stride and is starting to enjoy it and is getting competitive. 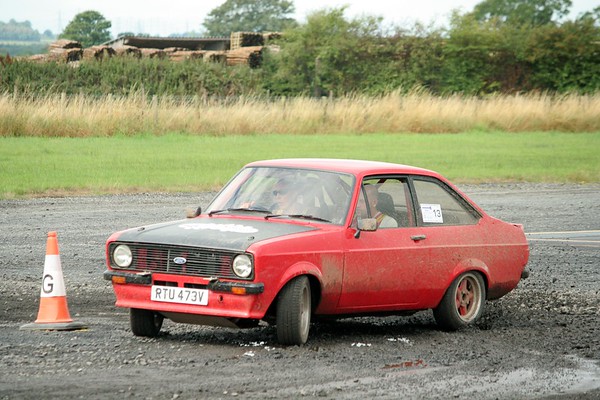 The rain lashes down.

Test 5 was at Park House and was new, narrow, tight, wet, tricky but fun.  A repeat of all the morning tests and then dinner. We have cleared all the tests and Ben is now really gunning for a result. We have a system that works, and the event is really enjoyable.

Tests 10 & 11, The Plumpe, are my favourite, fast, flowing and I feel I can let the Escort go a bit. (If only I had put new tyres on before the event rather than using worn out tyres that have done too many events, I must remember to lose my Yorkshire roots).

The Mossband test, great fun once I had the Escort drifting round the carpark, Ben’s calling the notes, I’m getting carried away and I overshoot the finish line. Unfortunately, I lose a few seconds reversing back astride the line.

Riverside, now we’re getting cocky! And of course, we miss the stop astride on the out leg. We take a penalty.  Ben is all for bursting into tears!

We clear all the final tests and return to our nemesis, the Riverside which has one last secret to give. Out leg, stop astride line, perfect, I flick the car round the turn point cone M at the end with just a little too much exuberance and put the rear of the Escort just into the hedge………and guess what……find a post in it. My heart sinks as I hear a bang, Ben takes over “Don’t worry about it, keep going, keep going”. We finish. I get out to check the damage and to my surprise find very little, just a scuff.

A fantastic day and to cap it we get a trophy for 3rd in class. Thank you to Ben for really getting the bug and of course to the Spadeadam team for a great event.