The October autotest was held at the Peth, nr Longtown, but this year, instead of the concrete of the main yard, we were in the lower yard on the gravel and mud. We had 15 starters, including 11 newcomers and 4 juniors.

Test 1: Helen (me) was fastest on 46 seconds, followed by three members all on 48 seconds – Nigel Harkness, newcomer Mike Burke who’d swapped the MX5 for a Yaris, and an excellent start by junior member, Martyn Petry.

Then we had newcomers Mark Salisbury, Carl Barnett, Rob Glendinning and junior Sam Trotter on 49 seconds. This might be a close-run day!

Test 2: A repeat of test one, and joint fastest time on this test went to Martyn Petry and Mike Burke with 46 seconds. Followed by Nigel and Helen on 47 seconds. Sam Trotter was hot on their heels with 48 seconds. Then the MX5s of Drew McLean and Phil Hodgson, and John Ross in the club car, all on 49 seconds.

Test 3: Mark had a good run with 58 seconds, followed closely by Mike & Helen on 59 seconds. Then straight minutes for Phil, Sam, and Rob.

Test 4: FWD & RWD taking joint fastest time on this test, with 58 seconds, Nigel, Sam and Drew all on 58 seconds! This really is going to be tight! Behind them Helen on 59 seconds.

Test 5: The drivers were starting to get the feel of the surface, even with the big bumps that were being created in the mud/gravel/bark surface. With four getting a time of 43 seconds – Phil, Mark, Mike and good to see another junior getting a fastest time Sade Burke. Following them by one second were Helen & Drew on 44 seconds. An unfortunate detour for Veronika Salisbury cost her time on this test.

Test 6:  Martyn and Nigel lead the way, both on 42 seconds. Followed by Drew, Phil and Helen on 43 seconds.  Mike, Mark & John were only 1 second behind on 44 seconds. At this point it was all to play for! We unfortunately had to say goodbye to Rob at this point.

Test 7:  For this test, the red mist must have come down for Nigel, as he set a time of 55 seconds. 2 seconds quicker than the next fastest time of 57 seconds f Mark & Mike.

Test 8: Nigel was going for consistency, with another 55 seconds, but this time, hot on his heels with 56 seconds, were Mark, Mike and Helen. Close behind them were Drew and Phil on 57 seconds.

Test 9: Nigel must have been worried about what was going to happen later that evening for supper, so he put his foot down and did a 1m 1s. Followed by Drew and Mike on 1m 2s. I mustn’t have been too worried about supper, following them on 1m 3s, along with Mark. Sade unfortunately had a wrong test on this one.

Test 10: At this point, the cool day had turned decidedly freezing and it was decided that our brave marshals, Mike Lindsay and Graham Petry had gone above and beyond their duty, standing out in the cold. So now the pressure was on, only two tests left. Nigel kept his foot down for this test and produced a 1m dead. He was 2 seconds ahead of both Drew and Mark on 1m 02. They were followed close behind by two juniors, Sam and Jamie Barnett on 1m 03.

Test 11:  The final test of the day! Drew got the MX5 signing and took a time of 51seconds, followed by the MX5 of Phil on 52 seconds. Again, showing how close everyone was, there were five on a time of 53 seconds!! Mike, Carl, Martyn, Mark and Helen.

Thank you to Mike and Graham for marshaling. Thank you to Barry Lindsay for doing the results. Big thanks to Allan Falder and A&H Carlisle for the venue.

Final results… and it was close!! 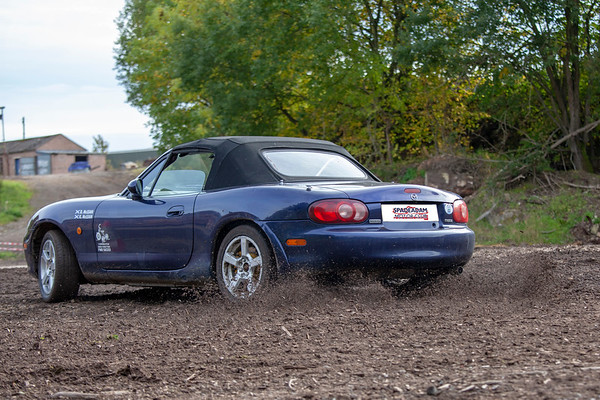